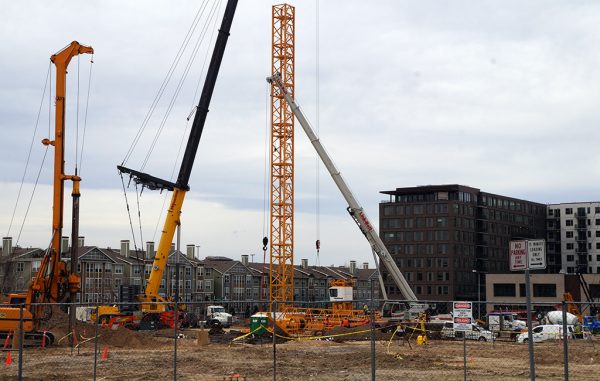 AMC Theatres plans to open a movie theater in a massive development going up at the former University of Colorado hospital site along Colorado Boulevard.

9th Avenue (Denver) Land LLC, a joint venture between Continuum Partners and CIM Group, announced Monday that AMC and five retail tenants leased space in the development, dubbed 9th and Colorado after the nearby intersection.

The AMC theater will comprise 44,000 square feet on Albion Street between Eighth Avenue and the yet-to-be-built 8th Place, the developer said.

Just west of the theater, at the northeast corner of Eighth Avenue and Colorado Boulevard, Hopdoddy Burger Bar, Zoe’s Kitchen and Postino WineCafe have signed on for space.

It will be the second location in Denver for each of the chains, although Zoe’s Kitchen, which serves Mediterranean food, has additional locations in the suburbs.

Rounding out the retail tenants announced by the developer Monday are Chase Bank and Bellco Credit Union, which will open along Colorado Boulevard.

The 26-acre project is expected to comprise about 2 million square feet of development once complete.

The former hospital was demolished earlier this decade; only a parking garage, former nurse’s dormitory and “research bridge” across Ninth Avenue were left standing.

Will there be any “For Sale” product in the development?

Are Starbuck’s, Swing Thai, et al leaving? How are the new restaurants coming to the NW corner of 8th and Colorado if not?

Reporter here. Sorry, that should’ve been the northeast corner of 8th and Colorado

Was there a zoning change to allow this massive theater? Can’t imagine the neighbors are happy about it.

as a neighbour, I am very excited about this, new dense walkable retail, entertainment amenities, with offices most importantly a great addition of much-needed housing units. construction is a little cumbersome, but I think we need more mixed-use dense development in my neighbourhood and in much of Denver, designed well to serve the community and create a walkable urban neighbourhood and help combat housing cost by adding more supply. My only hope is that it could be taller, with more housing and more green, public space, more affordable housing and yes, a bunch of for sale condos in addition to the townhomes would be great.

I just drove by the sign yesterday and saw there was an AMC coming in. I can’t tell you how excited I am for it, as I go to the movies quite often. I live right in the neighborhood and I’m about to sign my lease for another year. Do you know when the movie theater is slated to open?