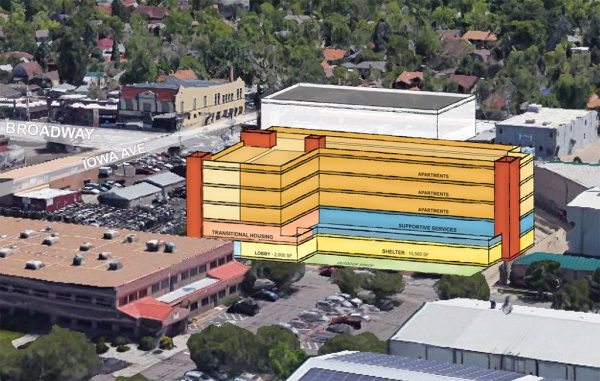 A recent rezoning approval by Denver City Council paves the way for a nonprofit to expand its youth homeless shelter.

Urban Peak, which works with homeless individuals ages 15 to 24, operates a 40-bed shelter in a one-story building it owns at 1630 S. Acoma St. With the new rezoning, the organization hopes to bring it up to five stories.

CEO Christina Carlson said the shelter needs to be updated, and the organization figured it was a natural time to attempt something more ambitious.

“The bottom line is there is way more demand than we can meet and this will expand our services,” she said.

With the rezoning approved, the nonprofit plans to determine the cost of additions and how to fundraise. It is working with Shop Works Architecture and Blue Line Development on the project.

Carlson said the plan is for the first floor of the expanded building to remain a 40-bed shelter, with a kitchen that serves three meals daily.

The second floor would have office space for Urban Peak staff, as well as transitional living space. Carlson said transitional space is the next step for youth looking to move out of shelter life and into a space of their own. It would have a similar set up as a college dorm, with shared living spaces and kitchens.

The top three floors would be affordable apartments. Carlson said it hopes to build up to 60 one-bedroom units.

Urban Peak has outreach programs to connect with youth and give them resources to live on their own. The nonprofit provides some job training in addition to housing, which Carlson said helps prevent chronic homelessness in the future.

In addition to the shelter on South Acoma, Urban Peak operates a drop-in facility at 2100 Stout St. The facility there, which offers laundry, breakfast, basic medical care and showers, temporarily closed last April because demand was too high for staff to handle. The organization launched a $150,000 fundraising campaign in July to hire more staff for the shelter.

A recent rezoning approval by Denver City Council paves the way for Urban Peaks to expand its facility five-fold.