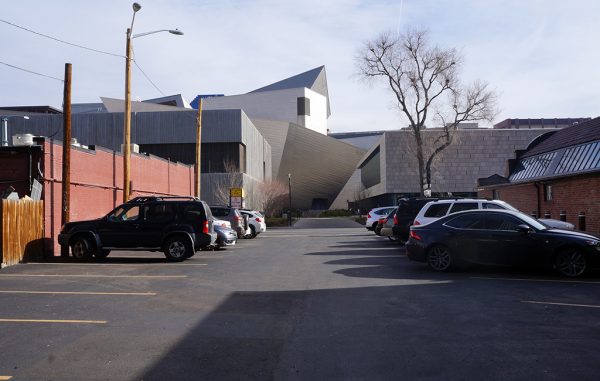 The Clyfford Still Museum Foundation purchased a lot across from the museum. (Thomas Gounley)

The foundation for an art museum in Golden Triangle has paid $1.7 million for a parking lot across the street from the facility, with no immediate plans for development.

The Clyfford Still Museum Foundation, acting as Bannock Acquisition LLC, closed on the purchase of the 0.17-acre lot at 1245 Bannock St. on Monday, according to city records. The seller was a family trust and associated parties.

The Clyfford Still Museum, which opened in 2011, is located at 1250 Bannock St. next to the Denver Art Museum. It is dedicated to one of the leading early figures in abstract expressionism, an art movement in American painting that flourished after World War II.

Director Dean Sobel said the purchase is an effort by the museum and foundation to be proactive.

“Both are committed to the (Golden Triangle Creative) District and to leaving open the ability for the museum to grow its programs, should this become necessary or desirable in the future,” Sobel said.

The parking lot has about 30 spaces between restaurant Cap City Tavern and the future site of the Kirkland Museum of Fine and Decorative Art. It is managed by Chicago-based SP+ Parking, which advertises rates of $5 per hour, up to a maximum of $10.

Sobel declined to comment on whether management of the lot would change, and whether the foundation was interested in acquiring additional property in the area.

The Clyfford Still Museum Foundation purchased a lot across from the museum. (Thomas Gounley)

The foundation paid a pretty penny for 30 parking spaces across the street from the facility, with no immediate plans for development.