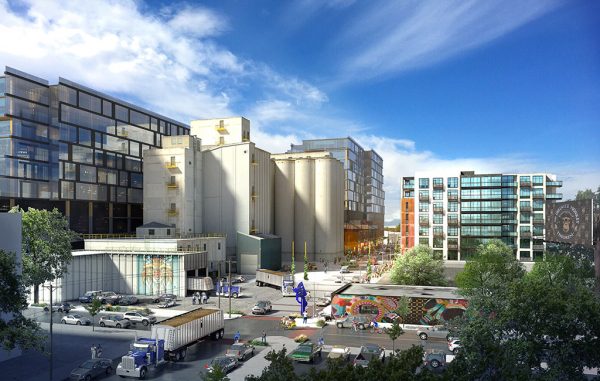 Rendering of the planned redevelopment of the Giambrocco Food Service site in RiNo. (Oz Architecture)

With an appetite for redevelopment, a RiNo-centric team has bitten off two more chunks of land near Brighton Boulevard for $8 million.

Tributary Real Estate and Charles Street Investment Partners purchased 2 acres at 3600 and 3695 Wynkoop St. on June 2. Tributary says it has planted a flag on 11 nearby parcels in the last 15 months as it assembles land for a mixed-use redevelopment.

“These two closings represent another milestone in our overall master plan that will create a vibrant and walkable neighborhood on the west side of the 38th and Blake transit stop,” Tributary and Charles Street wrote in an email to BusinessDen.

The site at 3600 Wynkoop is home to a 38,000-square-foot warehouse that has been used as a training rink by Denver Roller Derby and an event space called Glitter Dome Event Center. A smaller warehouse sits on the parcel at 3695 Wynkoop. Tributary said it will take over leasing and management at both properties until redevelopment begins.

Tributary announced last year it is laying the groundwork for a master-planned community that would turn the Giambrocco site into a mix of office, residential and hotel space.

“We want to weave the existing buildings and new elements together, which is what makes RiNo such a great neighborhood,” Tributary and Charles Street said in an email statement.

Tributary Real Estate is run by Bill Parkhill, Ryan Arnold and Tucker Crockett, who announced its launch at the end of last year. Parkhill, an architect and developer, and Arnold, previously a broker with JLL, had been investing in RiNo for over a year prior to the launch.

Tributary is also a partner on Revolution 360, a nearby office and retail project planned for 36th Street and Brighton Boulevard.

The firm has sold another parcel it purchased from Giambrocco, 3609 Wynkoop, to McWhinney. The Loveland-based developer plans to build 84 apartments on the site.

Rendering of the planned redevelopment of the Giambrocco Food Service site in RiNo. (Oz Architecture)

For its 11th parcel in the area, a company purchased 2 acres at 3600 and 3695 Wynkoop St., with plans for redevelopment.