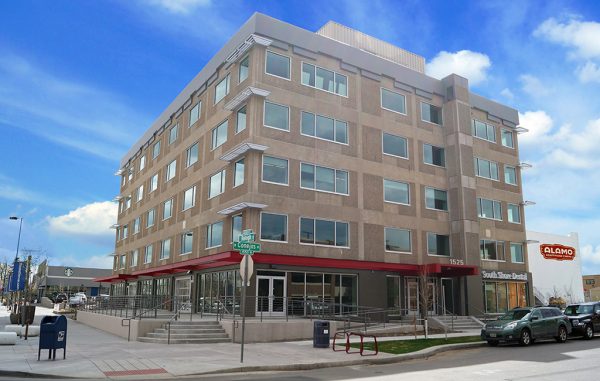 The office and retail development at 1525 Raleigh St. sold for $12.8 million. (Centre Point)

A newly remodeled office and retail development in Sloan’s Lake has a new owner.

“It’s an alternative to the expensive downtown market,” he said. “We know there’s a demand, pulling from downtown Denver and suburban Lakewood and Wheat Ridge.”

The project, 1525 Sloans, stands five stories tall, with 50,000 square feet of office space and 6,000 square feet of retail. Both are filling up quickly, including a Starbucks that opened on the retail pad, and coworking concept Goosetail Spaces preparing to open in the renovated building.

“We started at 21 percent occupancy when we first went under contract and when we closed we were at 51 percent,” Manion said.

The sales price includes $11 million for the real estate and $1.77 million to take over a TIF loan, Manion said. Los Angeles-based Abington Emerson, which teamed up with Centre Point earlier this year to acquire a Lakewood shopping center, is Centre Point’s equity partner on the deal.

The office and retail development at 1525 Raleigh St. sold for $12.8 million. (Centre Point)

Real estate investors last week plunked down $12.8 million on 1525 Raleigh St., just as a developer finished remodeling a 1972 office building and added a retail pad to the site.