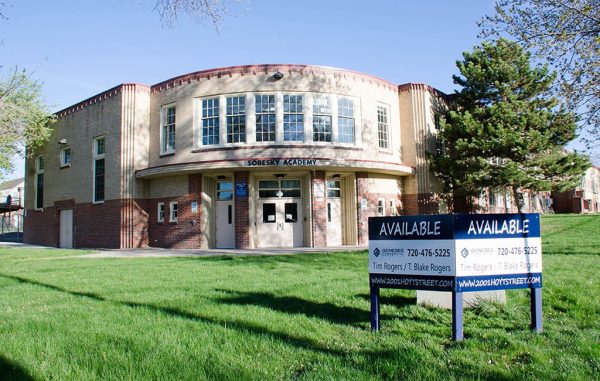 The former Sobesky Academy at 2001 Hoyt St. was listed for $2.8 million.(Gennesee Commercial Group)

The Jefferson County School District is looking to sell a 70-year-old Lakewood schoolhouse.

The district last month listed the 30,000-square-foot former Sobesky Academy at 2001 Hoyt St. for $2.8 million. It’s a two-story, brick building whose frame – and details like brass hardware, original wooden doors and water fountain alcoves – dates back to its first classes in the 1940s and 1950s.

“What grabs you is the architecture of the building,” said Tim Rogers, who has the listing with Genesee Commercial Group. “It doesn’t look like the school your kids go to today. They don’t build schools like that anymore.”

Rogers is hopeful kids will go back to school at 2001 Hoyt soon enough. He said he’s shown the campus to several potential buyers since it hit the market, most of them religious or educational institutions that could move in without rezoning.

“The highest and best use is the in-place use for any building,” Rogers said. “The challenge is that (the educational market is) a very shallow pool of prospective users.” 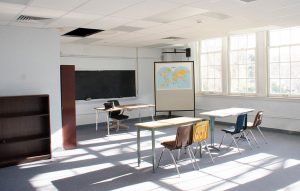 Blackboards and some equipment remain inside the former schoolhouse.
(Gennesee Commercial Group)

The ideal buyer would need to fill 17 classrooms, enough space for 350 students, Rogers said. He said he’s spread the word through local government agencies and nonprofits to find the right fit, and sent out marketing brochures to brokers and potential buyers.

Rogers, a commercial broker, sold the Martischang building on West 48th Avenue last year, and sold a vacant Safeway supermarket at Alameda Avenue and Harlan to Red Rocks Church in 2013. So he also isn’t ruling out that the buyer of 2001 Hoyt could rezone the property.

Such was the case with the last Jefferson County school to trade hands: The long-empty Fruitdale school building is being converted into a $5.5 million multifamily development. Hartman Ely Investments purchased the site at the end of last year after the 1927 building, which the school district had sold to the Wheat Ridge Housing Authority in 2011, was vacant for nearly a decade.

The Hoyt Street building originally was constructed for North Lakewood Elementary School, then turned over to older students at McLain Community High School in 1965, Rogers said. Sobesky Academy moved into the building in 2003, but relocated to Wheat Ridge in 2015.

The former Sobesky Academy at 2001 Hoyt St. was listed for $2.8 million.(Gennesee Commercial Group)