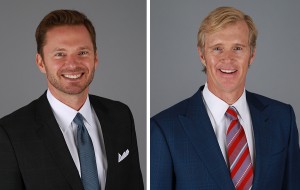 Savills Studley has lured office brokers Todd Roebken and Greg Bante and their support staff over from JLL as it looks to build a tenant rep firm in Denver.

Rick Schuham, who leads the local Savills Studley office, said he sought out the brokerage team because Roebken and Bante combined local business knowledge with strong national and international relationships.

“The best advisors have a global viewpoint,” he said. “Given the landscape of who’s been buying into Denver in the last few years, you’re dealing with decision makers in New York, Chicago, California, Germany, Korea and other places.”

Roebken and Bante come to Savills Studley with nearly 50 years of combined experience in real estate. Both are executive managing directors for the brokerage.

Schuham said the firm is searching for more Denver brokers. For now, it’s focusing on the office side, but will look into other sectors later.

“We will ultimately add industrial capabilities here. Retail is a question mark,” he said. “If we find the right person or people operating on a regional basis, it’s something we would certainly consider.”

Savills Studley works out of a nine-desk office at Independence Plaza, at 1050 17th St. Schuham said that’s a temporary spot, and the brokerage is in the market for new space.

“We’ll need more space than we’ve got right now,” he said. “And a lot less than JLL, CBRE or Newmark.”