The Sports Castle on Broadway liquidated merchandise and prepared to close in March.

A pair of law firms hired by the bankrupt retailer billed their client $1.5 million in June and $1.9 million in July, according to court documents filed on Aug. 31.

Since Sports Authority’s lawyers work for a debtor-in-possession, both must come with hat (and invoices) in hand to ask the bankruptcy court permission for payments.

The court has granted Sports Authority the right to pay Gibson Dunn $5.2 million, a sum that amounts to 80 cents for every dollar the firm sought in hourly compensation, plus its expenses. (The total does not include the bill for July, which the court has not yet reviewed.) 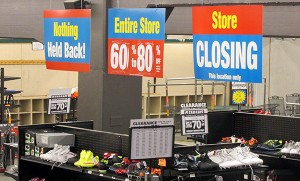 Sports Authority initially planned to restructure as a smaller retailer, but has since begun liquidating assets.

Of the Gibson Dunn lawyers working the Sports Authority case, nine attorneys bill north of $1,000 an hour. The highest rate goes to partner Mitchell Karlan, who bills $1,295 an hour.

The court has not yet approved the fees booked by a second firm hired by Sports Authority, Young Conaway Stargatt & Taylor. To date, the firm has sought payments totaling $1.7 million.

Young Conaway’s fees peaked in April at $430,000, while Gibson Dunn hit their apex in March with a $1.4 million payout approved by the court.

As it slipped into bankruptcy, Sports Authority initially said it would try to restructure and regroup as a smaller retailer. But instead, the sporting goods chain has begun liquidating its assets.

And company leaders have already started to march out the door. CEO Michael Foss as well as the company’s chief marketing officer and chief financial officer have already departed their posts, according to filings with the state of Colorado.

Remaining executives, like the debtor’s lawyers, are looking for a payday. On Aug. 31, the court approved $1.4 million in bonuses for three remaining execs, despite the objections of the U.S. trustee in the case.

The Sports Castle on Broadway liquidated merchandise and prepared to close in March.