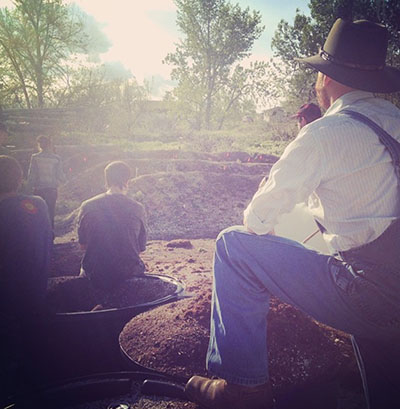 Denver-based Waste Farmers hopes to build the latter: an 80,000-square-foot facility on the Western Slope, where microbes will eat their way through soy, alfalfa and coconut fibers to make soil.

Founder John-Paul Maxfield said Waste Farmers expects to close on the property to build its plant by the end of May. The new soil-making plant would be five times the company’s current setup in Arvada.

And, he said, scale will help Waste Farmers start digging into the market share of bigger corporate rivals.

“We want to take every last dollar from Cargill and Monsanto,” said Maxfield, 35.

So Waste Farmers is starting from the ground up and building its foundation on, well, dirt.

The company raised $225,000 in April and is looking for $400,000, according to a filing with the SEC. Much of that will go toward the new facility, Maxfield said.

Maxfield started Waste Farmers with composting in Denver in 2009 after he left a private-equity job. As he started experimenting with soil making, Maxfield was joined by Matt Celesta, a friend who had studied soil science and pest management at the University of California, Santa Cruz.

So, what’s the dirt on their dirt?

Plants need nitrogen to grow. Maxfield said brands such as Scott’s add pellets of nitrogen to soil that could be as inert as sand without them. Farmers have to add fertilizers to keep replenishing the nitrogen.

Waste Farmer’s soil, instead, starts with inputs such as rice byproducts and oyster shells, which microbes in the soil break into nitrogen. One goal is to stop farmers from adding chemical fertilizers to the soil.

Maxfield sees two markets for this kind of soil.

First, there’s the company’s consumer brand called Maxfield’s, which is sold at Lowe’s, Whole Foods, and lawn and garden stores. The series includes a soil conditioner to mix into existing dirt, topsoil for the surface and planting mix. It’s meant for folks that eat organic and think their plants should, too.

Then, there’s the brand for commercial farmers, Batch 64, which mostly caters to cannabis cultivators. Maxfield said the industry is ripe for Waste Farmers soil because it hasn’t locked competitors into its supply chain and sells a crop valuable enough that it can afford to experiment with new technology.

Batch 64 includes three kinds of soils, some with just two ingredients so farmers can add to the mix.

The 13-person company also is moving into an office at Battery 621 on the corner of 6th Avenue and Kalamath Street this month, Maxfield said.

“There’s this focus on developing startups for investors to quickly exit, to sell to bigger companies that have existed for a long time,” he said. “We want to build a lasting company.”

The company aims at market shares of Cargill, Monsanto as it prepares to build large facility on the Western Slope.