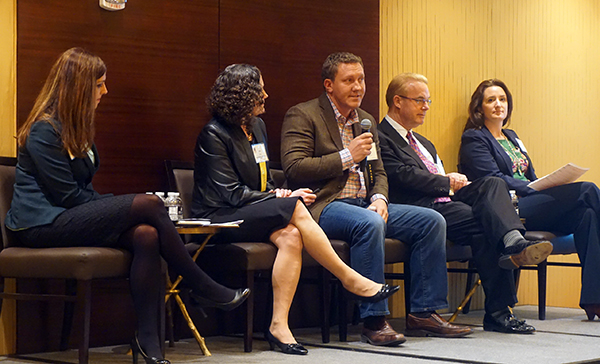 Rents of $3.30 a square foot for an apartment are a lot easier to swallow if you’re only paying for 365 of them.

Allante Properties principal Daren Schmidt is building a second project on Tennyson Street in Berkeley that will hit the market at $1,200 a month for a 365-square-foot studio. Schmidt said the company is trying to carry mini-building momentum after filling similar units at its Highland Place property on 38th Avenue.

“Within three days of them hitting the market, every one of them were rented sight unseen,” Schmidt said of Highland Place. “And it was purely based upon price point.”

Schmidt was one of four speakers at Tuesday’s Commercial Real Estate Women panel discussion on micro living, a trend that hit Denver in the past year as developers cater to renters that want to live in a premier location at lower prices – and don’t mind sacrificing a few hundred square feet to make it fit a budget.

The consensus: Micro units have found a home in Denver. After finding success with micros at Highland Place, Schmidt said he wished Allante had built more of them there.

So Allante wasted no time getting going at Tennyson Place, an 81-unit building with apartments as small as about 350 square feet. They’re planning a third complex in Uptown as well.

Allante is joined in the micro-apartment rush by Nichols Partnership, which opened its Turntable Studios in Jefferson Park last year. Urban Villages, along with Jeff Hermanson of Larimer Associates, is eyeing a parking-free, micro-apartment building near 14th Street and Colfax Avenue.

Schmidt said Allante spent about $2,500 more per unit at Highland Place than the company might have invested in a building without micro units. He said adding a little more polish to the units would offset the smaller footprints.

“It’s tiny, but I think the finishes you put in are very, very important,” Schmidt said.

There’s also more turnover in a micro unit than a standard one, Schmidt said. Nationally, Duty said that micro-unit renters renew leases about 41 percent of the time, compared to 57 percent for larger apartments.

Schmidt said some renters accumulate more stuff during their lease and others decide squeezing into less than 400 square feet isn’t for them. So far, however, finding the next renter has been simple.

“We will put an apartment listing online, and it is literally leased within two or three hours of hitting the market,” Schmidt said.

Nationally, Duty said some developers are hedging their micro-unit bets in case small living isn’t a lasting trend. For example, some developers are designing their buildings so that they can convert a couple of micro units into a single studio or one-bedroom apartment. She added it’s also more common to see buildings with a mix of unit types than a complex of all micros.

However, just north of Denver, one development firm is doubling down on diminutive living.

Robert Smith, CEO of Microtopia Village, who also spoke at the event, is working on a plan to build more than 550 tiny, for-sale homes on a 100-acre site near Longmont. The stand-alone homes will start as small as 500 square feet, according to the company’s website, and Smith said he has an interest list about 150 potential buyers long.

Microtopia Village’s homes will surround a community hub with restaurants, shops, bars, health club and laundry facility. The community also will have a row of greenhouses for gardening.