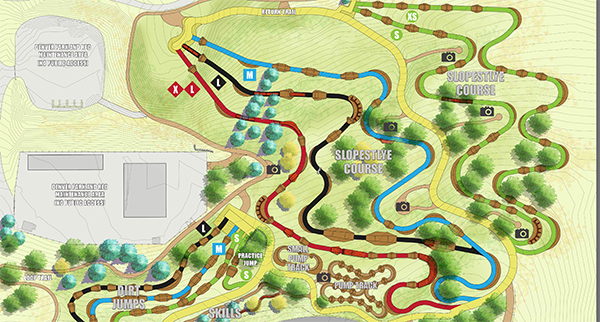 While Colorado bike manufacturers churn out new mountain bikes, the City and County of Denver wants to give Denverites a place to take them off road.

The city’s Parks and Recreation Department is building a 7.5-acre mountain bike park, a sort of ski hill for bikers, at Ruby Hill Park.

“We realized there’s nothing like this facility in the Denver area, and saw from the success of similar parks in Winter Park and Boulder that there’s a lot of interest in this kind of thing,” said Jason Himick, the bike park’s project manager.

Himick said the Ruby Hill Bike Park is intended for mountain bikers of any skill level. The 7.5-acre park will feature mountain bike trails, a slopestyle course and obstacles such as dirt jumps once it opens in July, Himick said.

The park will cost about $1.8 million to build, Himick said. The funding comes primarily from Denver taxes. Also, the Walton Family Foundation – a philanthropic organization founded by the family that owns Wal-Mart – contributed $560,000.

It’ll cost about $60,000 annually to maintain Ruby Hill Bike Park, Himick said, including paying for a full-time employee and one summertime staffer to take care of the facility.

Planning for the facility began in 2014, when Denver approved a redevelopment plan for the site. The success of similar facilities such as the Railyard, a winter ski park at Ruby Hill and Winter Park’s Trestle Bike Park contributed to the city’s approval of the plan, Himick said.

The city hoped to finish the bike park by December, but construction delays pushed the opening to this summer. Ruby Hill was formerly a dumping ground for asbestos in the 1940s and ’50s, Himick said, which brought challenges to the construction process.

“Cleanup is ongoing. The cost so far has been at least $500,000,”  he said. “There could be more – as they install trees they need to dig, and if they find any material, they have to dispose of it properly.”

The bike park is one facet of Ruby Hill’s renovations, outlined in the city’s master redevelopment plan. Another feature, the Levitt Pavilion music venue, is slated to open next year.

The city’s Parks and Recreation Department is building a 7.5-acre mountain bike park, a sort of ski hill for bikers, at Ruby Hill Park.

I visited the Ruby Hill park and was impressed. My family has different level mountain bikers and it was great for all of us.

I had been there with my family, and we’re really impressed. I have an entry-level mountain bike and I love it.