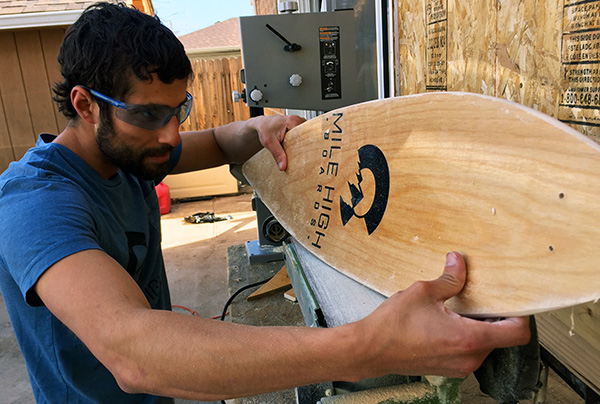 Jon Lopez is getting his first business rolling on the decks of longboards that he made himself.

The Purdue-educated engineer, 26, will bring his longboard company, Mile High Boards, to market this week when he debuts his first models at LoHi’s Boardlife shop.

“I’ve been longboarding since I can remember, and I finally got sick of the ridiculously high prices for boards, especially locally made stuff,” Lopez said. “I want to turn that around and make a great product that people can afford.”

Lopez struck a deal with Boardlife, which opened its second location in Austin last year, to sell his boards on a trial consignment basis.

He also consulted Boardlife’s manager, Alexia Lopez, on his boards’ design and construction.

“I pretty much gave him an idea of what customers ask me for when I’m selling them the boards,” Alexia Lopez said. “Basically, how to make something that appeals to a lot of people at once and is easy to ride. He took the idea and ran with it.”

Jon Lopez needs to fill another 50 board orders, mostly from family and friends, he said.

Lopez said he’s made about 75 boards in three years in order to perfect his design. He’s settled on two  board designs: the Pinto, a ride made for beginners with a top speed of 20 miles per hour, and the Bomber, a freestyle board made for expert speed demons.

He cuts and presses the boards’ decks himself, and uses trucks and wheels made by California-based companies Caliber Trucks and Blood Orange, respectively.

At $150, the boards are cheaper than local competitors such as Never Summer, which sells boards at prices ranging from $190 to $300.

Lopez makes the boards in his garage. The Chicago native has decked out the space with $10,000 in equipment, including a CNC machine and a hydraulic press, he said. He anticipates spending another $30,000 to $40,000 before he’s at full production capacity.

Lopez builds the boards during his time off from his job as a project engineer at Golden-based APC Construction.

“I usually get off work around 5 p.m. or so and I’m working in the garage until 10,” he said. “Sometimes I even fall asleep in there.”

It takes about three days for Lopez to build a longboard, he said. The first day involves staining the wood and setting it with a polyurethane base. Next, he applies 48,000 pounds of pressure to the board with his hydraulic press. Finally, he cuts and sands the shape of the board’s deck, and applies resin and grip tape.

Lopez is seeking factory space to open a Mile High Longboards workshop. He said his ideal space is between 2,000 and 5,000 square feet and would be near his home in south Denver.

Jon Lopez is getting his first business rolling on the decks of longboards that he made himself.

Mile High Boards can be found at MileHighBoards.CO thank you for your support!!

Mile High Boards can be found at MileHighBoards.CO, thank you for your support!