A longtime Jefferson Park developer is taking on his biggest project yet.

“Within one block there’s a supermarket, there’s restaurants, bars and stores,” Berton said. “It also has great proximity to the business district, Safeway and the bus lines.” 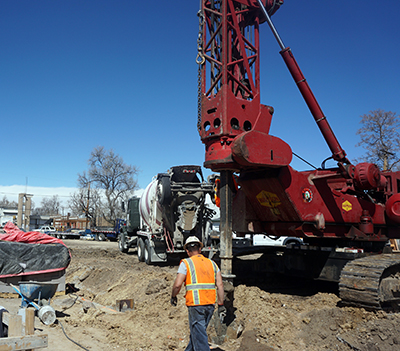 A shot of the construction site. Photo by Burl Rolett.

The five-story, $15 million project will take shape on a 0.37-acre property Berton has held for more than five years. He bought a note on this site and the nearby Granada Theater in 2008. After a complicated foreclosure process, Berton said he took ownership in about 2009.

Berton tried to lure a retail tenant for the Granada Theater, but eventually sold the building to a buyer that has converted it into a single-family home. Berton held onto the 2525 Eliot St. property, however, and has rented it out as a parking lot for several years.

While he’s been building and designing single-family homes, townhomes and commercial projects in Jefferson Park for 20 years, Berton said he’s never taken on a project this big. He and his partners also are going in without a big-time capital partner, Berton said, which made financing a challenge.

The unit breakdown will come to about 65 percent one-bedroom apartments and 35 percent two-bedroom units, Berton said. Apartments will range from 550 to 950 square feet and Berton is shooting for rental rates around mid-$2 per square foot.

Plans also call for a fitness area, common room, bike-storage facility and an onsite leasing office. The building also will have a rooftop deck. Residents will park in a two-story parking deck, including one underground level.

Berton is hoping extra parking and a little bit of distance from the louder, more bustling parts of the Highlands will draw tenants.

“We think we’ll see young professionals who want to be in the Highlands area but want a little bit more quiet than you’ll find in the Lower Highlands, and maybe a little more parking,” Berton said. “But we think we’ll frankly get some seniors too, because of the proximity to Safeway.”

Berton’s firm, RealArchitecture, designed the Eliot Street apartments. Bristlecone Construction is the general contractor. The build should take about 16 months, putting the complex on schedule for a late 2017 opening.

It wasn’t like that when Berton started working in Jefferson Park in 2005, or when he bought 2525 Eliot St. out of foreclosure in 2008. But he thinks the neighborhood finally is reaching its potential.

“I’ve been really trying to push this neighborhood for a really long time and it’s really coming of age,” Berton said. “Neighborhoods take time to have enough residential to build businesses, and once businesses start coming in, they need even more residential to support their business.”