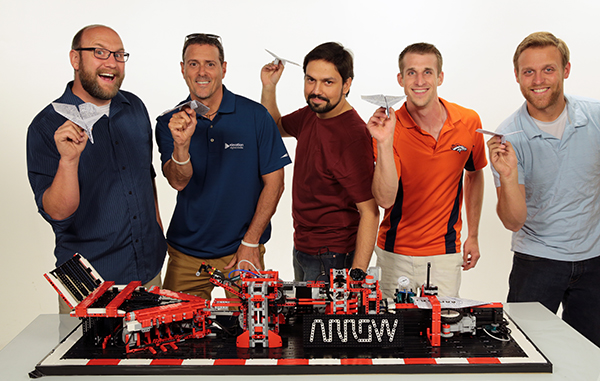 But in a commercial set to air during Sunday’s big game, a local film production house will use Legos to simulate how the building blocks made by Centennial-based Arrow Electronics become rockets and airplanes. It will be production agency Elevation Digital Media’s first 30 seconds of Super Bowl airtime. (You can watch it here.)

“We’re all Broncos fans, being Denver guys,” said Chris Lewis, Elevation’s co-founder. “But in our industry, this is the biggest weekend to celebrate professionally, and the town’s going to be celebrating personally.”

The spot filmed by the five-person crew at Elevation shows a piece of paper sliding through a Lego assembly line and then launching out the other side as a paper airplane.

And for gravitas, audio clips of astronauts in space soundtrack the 30-second spot.

“Legos are something kids play with; aerospace and defense are not to be taken lightly,” Lewis said. “It’s about grabbing the listener to say, ‘Wow, look how far we’ve come and imagine how far we can go.”

Arrow has long made many of the electronic components in airplanes, machinery and network infrastructure, but the company isn’t a household name. Sunday’s commercial will be the latest TV ad since the company started trying to boost its name recognition with spots during major sporting events in 2013.

The advertisement will air in metro Denver while another commercial hits other markets. It’s meant to inspire pride in employees and potential hires, said Meghan Macdonald, who manages PR for Arrow in the Americas.

“You’ve probably heard of us or seen us, but you’re like, ‘What the heck do they do?’” Macdonald said.

That was a question Lewis asked Arrow when the electronics giant first hired his film production company to make a series of 10 ads. But instead, Arrow gave Elevation a blank canvas and an ultimatum: Do whatever you please with the ads, but we’ll take our business elsewhere if we don’t like what we see.

But the series, which was never intended for television much less the Super Bowl, turned out to be “a home run,” Macdonald said. Just three weeks ago, Arrow decided to air the ad during the Super Bowl in addition to posting it online as originally planned.

For the spot that made the Super Bowl cut, Elevation flew in a Lego whiz from Brazil who barely slept for four consecutive days while building the paper airplane-making machine in the crew’s office in the Taxi development.

On the fifth day, they filmed. Arrow green-lighted the first draft Elevation turned in.

Lewis and his co-founder, Jon Stevenson, started Elevation Video in 2010. That company shoots highlight reels for high school athletes to send to faraway college coaches. Today Elevation works with a network of 90 contractors in different parts of the country, Lewis said.

In 2013, the pair used some money from the highlight reel operation to launch their advertising production house. The latter is now a separate business.

Arrow wouldn’t share the budget for the commercials. But Lewis said Elevation’s goal is to do the work first and consider costs later.

“With what we do, if you’re worried about how much paint you use, so to speak, you’re not going to be able to make a masterpiece,” he said. “Sometimes our accountant says, ‘Hey, dummies. You know you did that project for free, right?’”