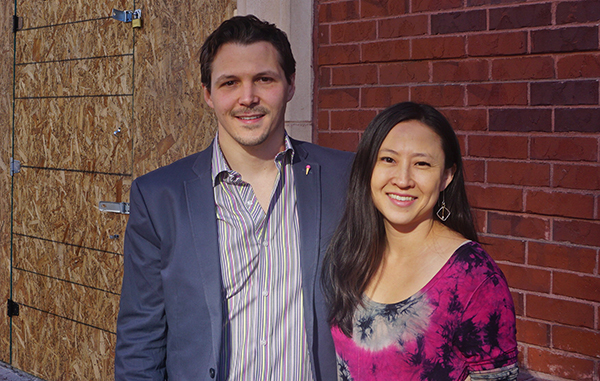 Winter could get frostier before it gets warmer in Uptown.

“Ice cream is going through a renaissance where it’s evolving to a new level, kind of like coffee did in the ’80s,” Gertzen said. “It used to be a convenience item, now we’re sitting in coffee shops, talking about different flavors and where the beans are coming from.”

Gertzen, 37, and Kim, 36, are leasing 2,000 square feet on the ground floor of the Uptown Square apartment complex. Their space, near the corner of Pennsylvania Street and 19th Avenue, previously housed a spa.

Kim is an attorney by trade who formerly worked for Xcel Energy, and Gertzen formerly worked in the software industry. They’ve traded briefcases for baker’s aprons and silicon chips for chocolate chips – both now work on Frozen Matter full-time

On trips out of town, the ice cream enthusiasts would seek out the best ice cream they could find. Eventually, the couple began traveling specifically to try out the hottest frozen confection purveyors around.

Gertzen and Kim have been transitioning their ice cream passion into a business venture over the past couple of years. They even attended a weeklong ice cream course at Penn State University, earning matching degrees.

The program covered the ins and outs of ice cream making with courses in the chemistry and cooking that goes into making frosty, scoopable sweets. The 70-hour course was well worth it, Kim said, even if it wasn’t always fun.

“It was single-digit temperatures, at the dairy farm, looking at cows,” she said. “But we learned everything from the cow to the cone.”

While they can’t hold Holsteins at their Uptown storefront, Gertzen and Kim are hoping Frozen Matter will stand out from other dessert shacks because they plan doing as much of the work between cow and cone as they can in-house.

Kim estimated about 98 percent of ice cream places make their product by adding different flavors to a premade frozen mix of sugar, water and milk because of federal regulations on pasteurization.

While it’s much easier to make ice cream from a premade base, Kim said it puts limits on flavors.

For example, different fruits have varying amounts of water. While a drier fruit might work well in one premixed ice cream formula, adding a fruit with much higher water content would throw off the ice cream’s consistency.

So Frozen Matter is brining most of the process under its own roof – it will buy milk, sugar and other ingredients and handle pasteurization and all the steps that follow in-house.

Kim said her pomegranate ice cream recipe would be impossible to make if she wasn’t able to start with a dehydrated ice cream base to balance out the water in the pomegranates.

Building costs will be closer to what it costs to build out a full-service restaurant than an ice cream parlor. Gertzen estimated startup costs would settle in the mid-six-figure range.

Frozen Matter is hoping to make back that investment by drawing in customers with a tastier ice cream, Kim said. They picked out their Uptown location in part because discerning tastes often find their way to the neighborhood’s many restaurants.

“17th Street is restaurant row,” Kim said. “There are a lot of younger, foodie-type people around who appreciate high-quality food.”

“When people go out for an evening, they’ll drive to a restaurant,” Gertzen said. “They won’t always drive for an ice cream shop.”

Frozen Matter plans to focus about 80 percent of its efforts on ice cream, Gertzen said, but they also plan on rolling out a line of freeze pops in the spring. Within the first year or so, Gertzen and Kim are also planning on making and selling soda in-house.

They’ll have a bar menu, as well, for guests that might want to pair a shot of liquor with a frozen treat.

David P. Goode Architecture designed Frozen Matter’s space, and Hive Construction is the general contractor. Kim and Gertzen are financing the startup costs with a loan from Collegiate Peaks Bank.

Gertzen said they first targeted a December opening, and he’d much rather navigate low temps than fight the holiday treat market with three months of dead winter ahead of a spring thaw.

“That was a lot more scary, to be honest,” Gertzen said. “But in Denver, climate-wise, it’s pretty nice by the time you hit March.”

Dishing out a big investment to bring the bulk of ice cream production in-house, a dessert-loving couple is launching a new creamery in Uptown next month.

I had a chance to meet them the day they were at my apartment’s leasing office getting signatures to support public approval for the shop. I will assume for the liquor license application. Very nice people, and I look very forward to trying it out on opening day on my walk back from work. Good luck guys, and welcome to Uptown!