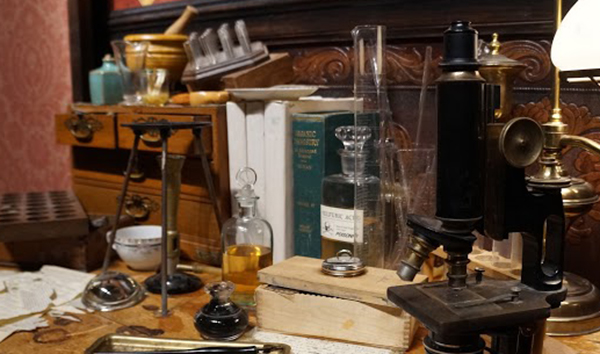 The detective from 221B Baker St. is making a stop on Colorado Boulevard.

On Friday, the Denver Museum of Nature & Science unveiled a temporary exhibit, “The International Exhibition of Sherlock Holmes,” which will run until Jan. 31.

There’s no mystery to the program’s appeal, said Jodi Schoemer, director of exhibits and digital media at the museum.

“Something like Sherlock Holmes has a terrific amount of marketability and popularity,” Schoemer said. “It sounded like it would be great for our guests.”

The exhibit guides ticketholders through a murder mystery fit for a book, steering them towards clues, letting them chat with actors in Victorian garb and teaching them a little bit of science and history along the way.

But high-profile exhibits such as this one often are costly, Schoemer said.

“This is an elaborate exhibition, so it’s quite expensive to lease,” said Schoemer, adding that the museum cannot disclose the cost to rent the exhibit. “We said, ‘Can we bring this in without losing money?’ And we could, so we did.”

Less-expensive exhibits pay for more-expensive ones, Schoemer explained, and sometimes the costliest exhibits can attract the biggest crowds. The museum also checked out how Sherlock Holmes had played at previous museums, including the Pearl Museum in Dallas, before signing it, Schoemer said.

The museum is adding a charge to its standard entry fee. Tickets to Sherlock Holmes cost $24 for adults, $20 for seniors 65 and up, and $18 for kids ages 3 to 18, which includes the price of museum entry. (General admission is $15 for adults, $12 for seniors and $10 for everyone else.)

The Denver Museum of Nature and Science is leasing Sherlock Holmes from Exhibits Development Group and Geoffrey M. Curley + Associates. It debuted at the Oregon Museum of Science and Technology in 2013 and will continue traveling internationally through 2017.

Holmes has attracted new fans since films starring Robert Downey Jr. opened in 2009 and 2011, and the BBC’s Sherlock series broadcast between 2010 and 2014.

Different kinds of fans have been coming to the museum recently, too, Schoemer said: more millennials and more people visiting without children. Sherlock Holmes could be part of that trend.
“Families are welcome to come and will enjoy it, but it’s something that will appeal to adults without children as well,” she said.

On Friday the Denver Museum of Nature & Science unveiled a temporary exhibit, "The International Exhibition of Sherlock Holmes," which will run until Jan. 31.