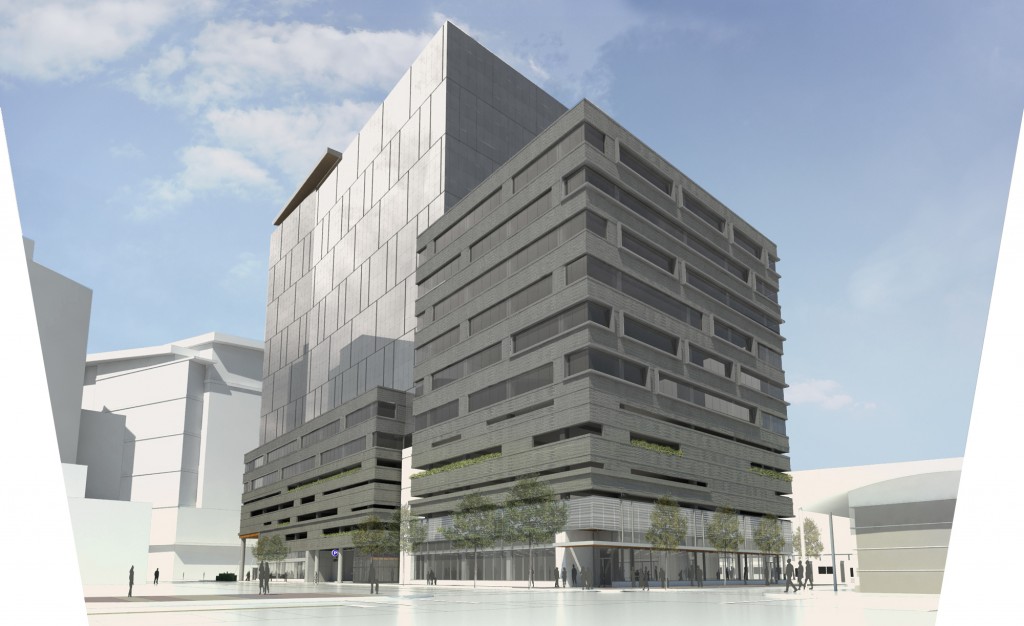 Kidney care king DaVita will anchor another massive development just a short way from its Denver headquarters, the company announced.

East West Partners will build a $190 million office building at 2001 16th St. starting next year to house dialysis firm DaVita. The company’s expansion comes only three years after opening a new headquarters building across the street from the planned office tower.

“Our growth has exceeded our expectations with how quickly we’ve been growing across the country and here in Denver,” DaVita spokeswoman Kate Stabrawa said. “We didn’t expect to need this space as quickly as we do, because we did just move in in 2012.”

DaVita has a long-term lease for 265,000 square feet of the new development’s 410,000 total rentable square feet. The company will handle corporate functions that could include IT, legal, marketing and more from the new building, Stabrawa said in an email.

East West will develop the 19-story structure alongside equity partner Starwood Capital. East West Managing Member Chris Frampton said the company bought the 1-acre plot about eight years ago and has been chasing a DaVita deal since the company first started looking at Denver. 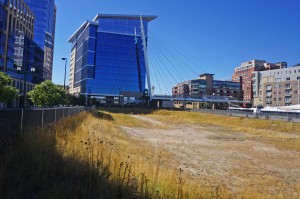 The new building will rise within eye shot of DaVita’s local headquarters. Photo by Burl Rolett.

“We first started talking to DaVita a long time ago about their original building,” Frampton said. “We were one of the folks pursuing them for that first building. They went in a different direction but obviously made a cool choice.”

Frampton said the building will stand out in downtown Denver because very few offices have such large floorplans.

“We know more and more tenants are looking for the type of incidental contact that comes from having more people on one floor as opposed to a few separate floors,” he said. “It’s a good corporate-user site, a good tech-user site.”

16 Chestnut will also have about 20,000 square feet of first-floor retail space. Frampton said it’s too early to tell what type of businesses might be interested but guessed the market will shift from destination retail and dining to more neighborhood-focused.

“To date, Union Station has been about entertainment – whether that’s dining for a special night out, getting a burger before a game or drinks late-night or earlier in the afternoon,” he said. “With everyone moving into the apartments that are just finishing and the office buildings starting now, we think the retail market will change dramatically.” 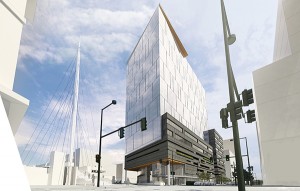 Gensler is the architect for 16 Chestnut. BuildMark will provide construction management services. East West does not yet have a general contractor signed on.

DaVita will add about 1,200 Denver employees to fill the new building, the company said.

The expansion comes months after DaVita agreed to pay out $495 million to settle a lawsuit accusing the kidney care firm of Medicare fraud. The half-billion check came with no admission of wrongdoing on DaVita’s part.

The 16 Chestnut project will be the third Union Station development that East West and Starwood have worked on in tandem. The two firms developed the Antero Resources-anchored One Union Station building in 2014 before selling it shortly after opening for $67 million. East West and Starwood also developed the Triangle Building, which signed tenants WeWork and Liberty Global.

As it gears up for construction at 16 Chestnut, East West is also designing a 345-unit condo project at 1700 Wewatta St.

Frampton said 16 Chestnut will be about the end of it for large-scale Union Station development.

“If it’s not the last site to break ground in the Union Station neighborhood, it’ll be the second-to-last,” he said. “It’s also the last major parcel on 16th Street for the entire mile-and-a-half stretch.”

Just a few years after failing to land the kidney health giant's massive HQ deal, a local developer is planning a 19-story building in Union Station to be anchored by DaVita, which will add 265,000 square feet and 1,200 employees to its Denver operations.