Bill Ward III is steering his Airstream rental business into a new direction.

Where he once rented the aluminum-clad campers to families and music festival attendees, he’s now going corporate with Living Airstream.

“We’re putting more of a focus on the corporate event type of rentals because corporations have extra money they can put towards these events,” Ward said. “Some of these corporations can sustain rentals for months and months.”

That’s some significant income, Ward said, considering it costs up to $3,600 per month to rent one of the Airstreams; day-trippers pay closer to $220 a day.

“Even though we did do that before, this year we’re actually creating specific Airstreams that are made for these events, whereas last year we just used normal models,” Ward said.

Ward estimates that renting to businesses currently makes up about 15 percent of the company’s income.

Ward got the idea when he began renting Airstreams to commercial real estate developers in 2012. The developers would use the Airstreams as swanky on-site sale centers.

But Ward isn’t taking his eye off of the nostalgic customer.

“We do Coachella, Burning Man – anything you can think of,” he said. “We have half a dozen trailers booked for going up to Red Rocks this summer.”

Every one of Living Airstream’s available trailers will be making the trek to Nevada’s Black Rock Desert for Burning Man at the end of August. And there are 25 more people on the wait list. 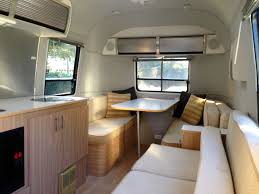 Living Airstream renovates the interior of the campers for vacation or commercial use.

The majority of Ward’s private clients – about 90 percent – hear about him online. The rest comes through word of mouth, he said.

Living Airstream owns 20 trailers now and hopes to be up to 25 by the end of August. The company is based out of Denver, but maintains locations in Los Angeles and Scottsdale. The company made $275,000 in revenue last year, up from $122,000 in 2013, Ward said.

Ward also owns a credit card processing company, a market research consulting firm, and buys and sells real estate in addition to being the sole owner of Living Airstream.

He said he got into the rental business by accident.

“It was literally a mistake. I bought my first one five years ago. I was with my family on the East Coast and I walked out the door and my dad asked where I was going – I said I was buying an Airstream. He asked to go in half with me,” Ward said. “I was driving to look at it, and a buddy from Denver asked what I was doing. I told him I was buying an Airstream, and he asked if he could go in on it with me, as well.”

Ward said he started working on a website to rent the first Airstream out for tailgating. At the end of 2010, he’d finished the website and started getting calls from people who wanted to use it for travel.

“I did something right and it just clicked,” he said. “Next thing I know, I’m getting calls from magazines to do stories, and all of a sudden people started finding me and it just blew up.”

An entrepreneur who repurposes old-school Airstream campers is polishing his business model in a turn toward corporate rentals.