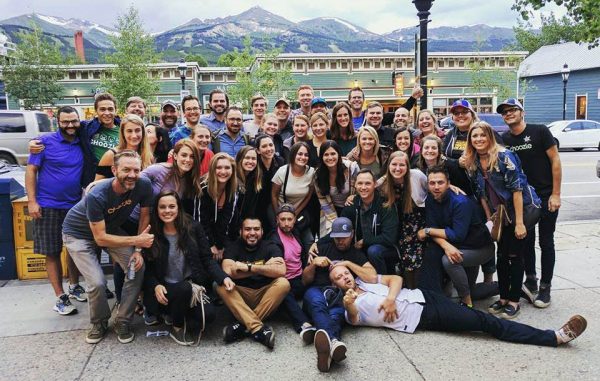 The sledgehammers came out this week at a Denver software startup’s Five Points office to knock down a wall and add 1,000 square feet.

After doubling its headcount this year, digital advertising platform Choozle removed a wall at its 2245 Curtis St. headquarters.

The company has hired 26 people this year, bringing its employee count to 54. It now leases 6,000 square feet at the corner of Park Avenue and Curtis Street.

“Sales has been the biggest department we have grown this past year,” spokeswoman Megan Sullivan-Jenks said. “What we are projecting is that we will probably be doubling our employees (again) by the end of 2018.”

“We always have to be ready or looking for space if we outgrow our current space,” Sullivan-Jenks said. “It’s not something we are actively doing, but it’s always something on our radar.”

Some of the new hires at the tech startup include developers and engineers. Last month it launched a tool that lets customers drag and drop 100 advertisement images at a time into campaigns, Sullivan-Jenks said.

“If you’re running advertisements, the biggest time suck is uploading ads,” she said. “It’s a matter of seconds that they’re uploaded and ready to use in a campaign.”

Co-founders Jeffrey Finch and Andrew Fischer launched Choozle in 2012 to more effectively target online users with ads of interest to their demographic. After securing a $2.4 million capital raise last December, the firm ranked No. 113 on Inc. Magazine’s fastest-growing companies list.

Choozle has raised a total of $8.6 million, according to a tally of SEC filings.

The sledgehammers came out this week at a Denver software startup's Five Points office to knock down a wall and add 1,000 square feet.