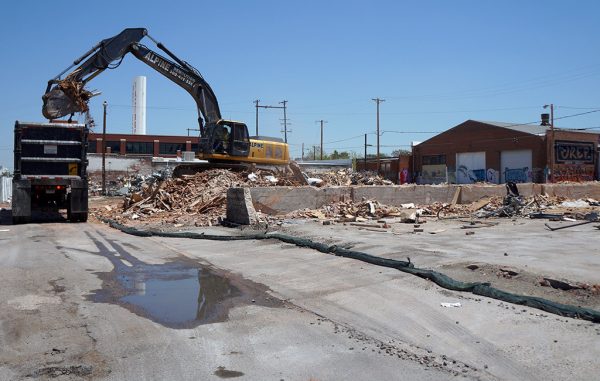 The RiNo apartment stampede is kicking up more dust.

Camden Property Trust has started demolishing the former Denver Hardware Co. block at 32nd and Walnut streets to make way for a 230-unit project that the firm says will cost $70 million to build.

Camden rezoned the 2.4-acre property from industrial to mixed use last year, then bought the land from Denver Hardware owner Daniel Kaatz for $15 million in December, city records show. Todd Triggs, Camden’s vice president of real estate investments, said the firm chose RiNo because of its proximity to downtown.

“It’s a location that’s close to the central part of Denver,” he said.

Construction is scheduled to begin in the third or fourth quarter, Triggs said.

Site plans by Wallace Garcia Wilson Architects, which have been filed with the city but are not finalized, call for a tiered design with three stories facing Larimer Street and up to five stories toward the middle of the block.

Designs also show a courtyard overlooking Larimer, with leasing offices to one side and a fitness center behind it, toward the middle of the block. The complex also would include 360 spaces in a parking structure, according to the plans.

Texas-based Camden is a publicly traded REIT. The addition of Camden RiNo gives the company 2,862 units in the Denver market, according to its 2016 annual report. That tally includes Camden Lincoln Station, a 267-unit development in Lone Tree that started leasing in August 2016 and is set to finish construction at the end of June.

Future residents of Camden RiNo will peer out their windows at other new apartments in the neighborhood, including Mill Creek Residential’s Modera Blake Street going up between 28th and 29th streets.

A Texas firm has started demolishing structures at 32nd and Walnut streets to make way for a 230-unit apartment project.

Lets keep destroying beautiful land for more apartments…. Ridiculous… I believe in growth but this is now over crowding. You all build all of these apartments/condos/townhomes.. but the rent is so high most people cannot afford to live there and now we have more homeless people thanks to all of you!.
All the folks who have moved here in the past three years should be the ones paying for all of this new build in Colorado “Like California & Texas” No once again they’re raising our property tax to pay for all of this overbuilding. Wait until the market crash’s… There will be empty buildings every where. ALL. OF YOU SHOULD BE ASHAMED TAKING GODS LAND TO MAKE YOU ALL RICHER.

To bad they are not going to be condos for sale. We need more places to buy not rent. Wrong vision.