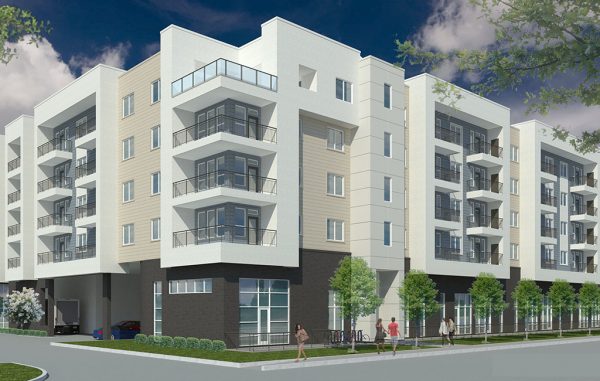 Wood Partners knows what it likes.

The Atlanta-based developer is digging into South Broadway for the third time. It purchased a parcel on the northwest corner of South Cherokee Street and Alameda Avenue for $3.4 million on May 2, city records show.

The site adjoins the 338-unit Alta Alameda Station development, which Wood completed in 2014. The project, Alta Sobo Station, is soon to break ground and will have 187 units.

Tim McEntee, partner with the firm overseeing Wood developments in the Rocky Mountains and the Midwest, said he started eyeing the corner in 2004. Wood purchased the land for Alta Alameda and, a few months after putting the final touches on that building, got the lot next door under a letter of intent.

“(Alta Alameda Station) did and is doing exceptionally well,” McEntee said. “South Broadway is a dynamic, ever-evolving part of Denver. It’s hit a nice critical mass of service and retail. And transit-oriented development access is fundamentally important to us.”

The 2 acres include parcels owned by the Vikki L. Gold Living Trust and Atlantis Community Foundation, a spot that includes a pair of garages and a small house, city records show. Atlantis is building a 60-unit complex intended for disabled and low-income tenants on the property immediately east.

McEntee said Wood plans to break ground on the five-story Alta Sobo within a few weeks. Move-ins are 21 months out.

The development, designed by the Dallas architecture firm Womack + Hampton, also will include a rooftop deck, pool, two-story fitness center, café and speakeasy bar hidden behind a wall.

Woods is the project’s general contractor, but has brought on Norris Design as its landscape architect and Harris Kocher Smith as its civil engineer.

Wood Partners has sold its other two projects on South Broadway. Alta Alameda went for $84 million in 2014 and Alta Cherry Hills in Englewood sold for $78 million last month.

The parcel on Alameda Avenue adjoins the 338-unit Alta Alameda Station development, which the Atlanta-based firm completed in 2014.

Do you mean the northEAST corner of Alameda and Cherokee?

STOP BUILDING APPARTMENTS!!!!!!! Colorado is nothing but a congested place to live now!. Thanks to all the iodates who were voted into office 🙁 They should all be ashamed for taking our Colorado land for a structure… Wait until the economy crash’s then we will have empty apartments everywhere…
Lets build homes …!!!!
All of you make me ill.

Why do people in this state constantly complain about growth and investors building 4-15 story apartments in the actual city limits of Denver. 4-6 homes on a block or a 200 unit complex on the block. The homes are being built in the neighborhoods they should be. Also the city will begin to sprawl on the outer parts sooner then later and that’s where houses, town homes, and even some nice condos needs to be built. But building apartments within a couple miles of the city center makes complete sense.