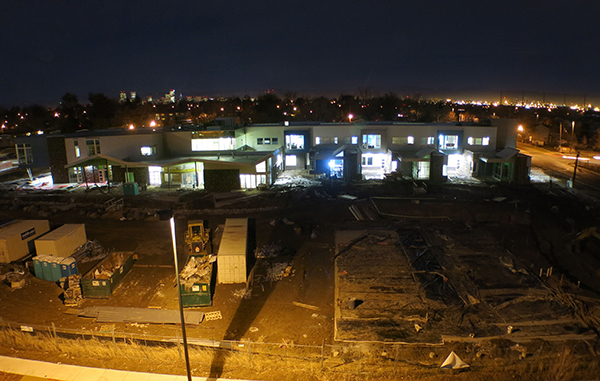 After three years of planning, the Mental Health Center of Denver’s new site in northeast Denver will open Dec. 15.

The Dahlia Campus for Health and Well-Being at East 35th Avenue and Dahlia Street will include not just space for counselors to meet with patients, but also a dental clinic, two schools and a community garden.

Lydia Prado, vice president of child and family services, started looking for an additional site for MHCD three years ago, eventually landing on the 4-acre city block at 3401 Eudora St.

“We were out of space, and with Medicaid expansion, we were seeing more and more families,” Prado said. “Northeast Park Hill has more children under 6 than other parts of Denver, but it doesn’t have more mental health services.”

MHCD, which reported revenue of $77.5 million in 2013, already worked with many visitors from the neighborhood, Prado said. But in the following years she spent canvassing Globeville through Elyria Swansea and into Northeast Park Hill, Prado found that residents had more on their minds than lack of mental health services. School principals noticed kids missing classes because of dental issues that went untreated. Parents told Prado that they couldn’t find fresh produce for their kids near home.

Still, the idea of a mental health center moving in next door spooked a lot of residents, Prado said.

“The fear is that there would be crazy people around that were going to be harmful,” she said.

The new campus will house mental health counselors and a pediatric dental clinic with four chairs for cleanings and regular checkups. Two schools – Skyline Academy and Sewall Child Development Center – will have seats for 96 students total in the center.

The Dahlia Campus will also grow vegetables and raise fish in gardens and a greenhouse. Indoor amenities include a kitchen for cooking classes and an indoor basketball court anyone from the neighborhood can book in the evenings.

The Dahlia Campus will be the eighth facility operated by the Mental Health Center of Denver. It sits on a property that used to be part of the Dahlia Square Shopping Center constructed in the 1950s. But by the 1990s, many businesses had closed and only 15 percent of the center was occupied. A developer purchased the property in 2005 with the help of the Denver Urban Renewal Authority and demolished the shopping center.

Since February 2014, MHCD has raised $14.6 million, including donations from the Piton Foundation, the Temple Hoyne Buell Foundation and Boettcher Foundation. The project broke ground in October, 10 months after MHCD purchased the property for $1.8 million. City Projects was the owner’s representative on the sale.

Construction is almost complete, but building local trust continues, Prado said. She hopes that people will see their neighbors visiting Dahlia Campus regularly – to play basketball, to attend the dental clinic, or even, yes, to visit a mental health counselor – and think of the center as a healthy place to be.

“That’s going to be the best antidote to being perceived as ‘something’s wrong with me,’” she said. “In the end, I look forward to there being no stigma associated with the site.”

In addition to counseling spaces, a nonprofit's new campus in northeast Denver will provide room for two schools, a dental clinic and indoor basketball courts when it opens in a few weeks.