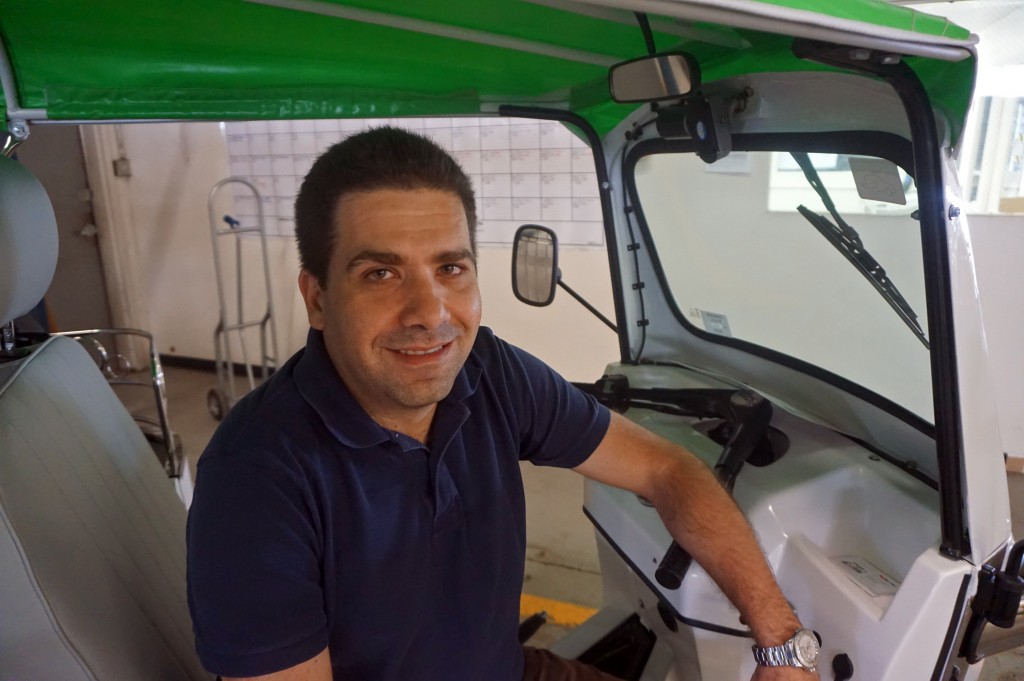 The same three-wheeled buggies that once hauled three Denver friends around South America are fueling a new business venture closer to home.

The first $20,000 electric tuk tuks are rolling out of eTuk USA’s River North warehouse. The company has sold 11 battery-powered trikes, mostly to businesses looking for a new vehicle to help peddle products.

“It’s a platform for entrepreneurs that want to do their own thing, maybe a run mobile coffee stand or something like that, or for bigger companies wanting to do promotions, guerrilla marketing and that sort of thing,” said Walid Mourtada, eTuk USA’s CEO.

Mourtada, with co-founders Colin Sommer and Michael Fox, launched eTuk USA earlier this year out of a 6,000-square-foot warehouse at 3860 Blake St. The three invested several hundred thousand of personal savings into the business, which makes and sells the battery-powered trikes.

And the trio also has a second venture that wants to lug passengers around downtown Denver at $3 a head.

So far they’ve sold six passenger tuk tuks and five for commercial use – business buyers include a local restaurateur looking to bring his products to events, a California hotel for shuttling guests and a company that peddles snacks at a national park. 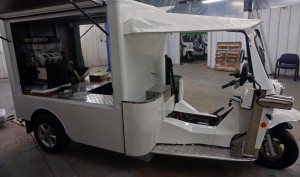 The tuk tuks can be outfitted for food vendors.

It’s a hefty price, Mourtada acknowledged, but he said the tuk tuk’s batteries essentially make it its own powerhouse on wheels. For an entrepreneur that needs a refrigerator or cooking setup, it’s much cheaper than buying a full-scale food truck.

“You can’t do nearly as much with a regular golf cart,” Mourtada said. “And a food truck is going to cost you two or three times as much, even for a used model.”

Josh Pollack, owner of Rosenberg’s Bagels & Delicatessen, bought a tuk tuk that’s currently being built. He and three friends will use it to launch a Rosenberg’s spin-off called City Pretzel Co., selling pretzels baked at his Five Points deli.

Fox, a regular Rosenberg’s customer, introduced Pollack to the tuk tuk. Pollack was hooked but knew he’d need to use it for more than slinging bagels and breakfast sandwiches to justify the $20,000-plus price tag.

“It didn’t make sense for just Rosenberg’s, so we kind of just married the two ideas together,” Pollack said. “We’ll keep it all New-York-themed because we’re using the New York water, and it’ll be a pretzel tuk about 80 percent of the time. And when Rosenberg’s has an event and wants to use it, we’ll just switch out the signage.”

As eTuk USA ships its first tuk tuks around the country, its founders are hitting the Denver pavement with tuk tuk taxi service, called eTuk Denver. The business has three tuk tuks humming around downtown and plans to grow to a fleet of eight in the next few weeks. 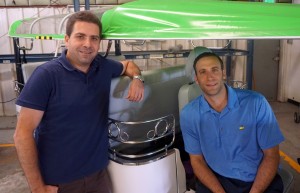 ETuk Denver wants to have 18 on the road by the end of the company’s first year, Mourtada said. The ride service can run as far north as the Highlands and dips southward all the way to Cherry Creek but has done most of its business on short $3-per-person trips downtown.

Longer rides cost more, and eTuk plans to sell advertising on a sign atop its rigs. Mourtada is targeting what he called “last mile” transport. For example, a rider may fly into the airport, take a shuttle to Union Station and need a ride from there to a downtown hotel or a friend’s house in RiNo.

Getting eTuk Denver on the road is also a marketing ploy for eTuk USA. Mourtada said people still aren’t familiar with the vehicles. But they take notice when one passes by and snap photos that end up on Facebook.

“We haven’t spent a single dollar on marketing,” he said. “But it turns heads, and that’s what you want from a marketing standpoint.”

Eventually eTuk would like to take its taxi model to other markets, but Mourtada said it takes a stack of regulatory work to enter a new city. In Denver, Mourtada said, it took six months before eTuk could begin shuttling riders around downtown.

And even with the go-ahead to run a Denver transport service, don’t expect to see tuk tuks buzzing around too many Denver streets any time soon. The batteries aren’t made for long distances, and the three-wheelers carry a top speed of 25 miles an hour.

“We’re not saying from day one we’re going to change the way people commute,” Mourtada said. “We’re providing more of a convenience for incidental transportation people may need.”

Mourtada and Sommer met in college 20 years ago at University of Michigan. The two met Fox, a University of Denver grad, about seven years ago. Mourtada previously worked as an automotive consultant. Sommer was a crash site investigator, and Fox comes from a sales and marketing background.

The Denver-based team found their business idea about 2,500 miles from home in Guatemala. 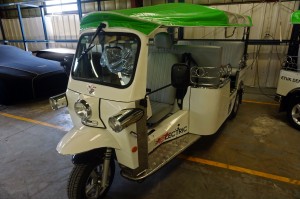 Passenger eTuks, like those used for the taxi service, can be made for three or six people.

“We just happened to be out there on vacation and were driven around in these great little vehicles,” Mourtada said. “We thought wouldn’t it be great to bring this back to the U.S.”

They went to work 2½ years ago on a plan to launch a tuk tuk business in the U.S. Mourtada said they wanted an electric model – the Guatemalan tuks rolled on gasoline. When they couldn’t find a company that made the vehicles in the United States, they ventured to the Netherlands.

ETuk USA worked a licensing agreement with a Dutch company that essentially bought the rights to manufacture and sell products in the United States.

But that deal, Mourtada said, was only a starting point. The vehicles weren’t legal in the U.S. ETuk USA spent the better part of two years tinkering with the tuk tuk design and bringing it up to American safety standards.

For example, Mourtada said, eTuk has to essentially rebuild the brake system, modify the headlights and tweak the battery system.

The company finally produced its first street-legal vehicles in March 2015.

Three buddies have just launched a RiNo business that sells tuk tuks, electric trikes that can be used to shuttle goods or passengers. And they’ve got three of the exotic vehicles cruising through downtown Denver picking up fares at $3 a pop.

I work for Amphenol Corporation, I would like contact information for Colin Sommer to discuss eTuk manufacturing operation. Thanks, Stuart